When Lularoe turns on you: how I lost my skirt in the front yard

When the new year rolled around, I couldn’t have imagined that 2016 would find me standing in my front yard without pants. But that happened. I blame Lularoe, really.

For those of you who aren’t familiar with Lularoe, it’s a clothing brand, and the strategy is pure genius.

1. Sell something women want (comfortable, cute clothes)
2. Make them fight for it. 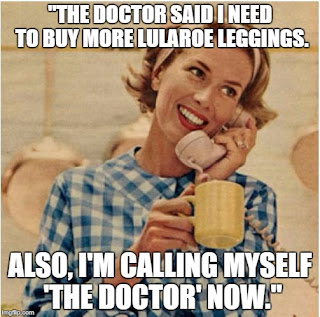 Lularoe is sold in “Pop-Up Boutiques”, either in someone’s home or online. A consultant has just a few styles, prints and sizes (this is where the “make them fight for it” component to the strategy comes into play). During a Facebook Pop-Up, the consultant posts pictures over the course of a few hours. If your friend, let's call her "Brittani", is faster than you are to comment “SOLD” on that adorable size small “Irma” top with the purple lightning bolts, that’s just too bad. Now you’re going to have to grit your teeth and compliment her every time she wears it, even though purple is your thing. Dang it, Brittani.

An online Lularoe Pop-Up is also a great opportunity to psychoanalyze your friends, which is super fun. Who’s an impulse buyer? Who’s indecisive? Whose husband is going to be super ticked when they see they spent $200 on leggings? Like I said - genius.

My story starts on a snowy Thursday morning in March. Snow is so much less exciting in March than it was in November, but I didn’t mind. I was headed to a meeting, and I was reaping the benefits of being very prepared for the morning. The kids were packed and ready to go to Gramma’s house, and we even had a few minutes to spare. The car was warming up in the driveway, and I was wearing my very first Lularoe maxi skirt for the very first time. The seven-year-old was in the car already; the four-year-old was gingerly tiptoeing toward the car, taking great care to not get a single bit of snow in his shoes. I carried the three-month-old outside and closed the locked door behind us.

It’s important to note that, first, the keys were in the car, which was running in the driveway, and second, the door was locked when I closed it. So, when I tell you that I woefully underestimated the length of my fun new maxi skirt and closed it in the door, you’ll have a good mental picture of my predicament. There I was, surrounded by snow, baby carrier in the crook of my arm, 100% stuck in the locked front door. My keys were ten feet away in the running car.

I laughed out loud, not too worried, because I knew my two big boys would be able to open the garage door and help me.

It would be the last laugh of the morning, because this is how the longest 18 minutes of my life unfolded.

7:25 a.m. - I close my skirt in the door, then urge middle child to hurry to the car and get his brother
7:27 a.m. - Middle child prioritizes “keeping shoes snow-free” above “immediate, unquestioning obedience”. Takes a full two minutes to reach the car door.
7:28 a.m.  - Middle child realizes car door handle is covered with ice. If there is anything worse than walking in cold snow, it is touching even colder ice. He insists that I come open the door for him.
7:29 a.m. - I coax him to open the door himself. No deal. He starts crying.
7:30 a.m.  – I begin to holler oldest child’s name, hoping to catch his attention
7:31 a.m. – Oldest child slowly emerges from the car, not unlike a sleepy bear coming out of hibernation. It doesn’t matter. At this moment, he is a serious contender for “favorite child” status. Not that I would ever rank my children in the privacy of my mind.
7:32 a.m.  – I instruct favorite oldest child to open the driver’s side door and retrieve the garage door opener.
7:33 a.m. – Oldest child suddenly forgets all shapes and colors. He is completely unable to identify "the gray rectangle" of a garage door opener that is sitting exactly right in front of him.
7:35 a.m.  - My coaxing escalates to almost-yell volume
7:36 a.m. – Oldest child begins sobbing great, heaving sobs.
7:37 a.m. – I am struck with a realization - my children are the types of people who are useless in a crisis. This is a good thing to know.
7:38 a.m. – I am every bit as stuck as I was at 7:25. Baby begins to cry

I’m sure you realize I had a decision to make in this moment. Should I give the skirt a good yank and just tear it free? This was not a Target clearance rack skirt type of situation. No disrespect meant to Target’s clearance rack, but this fabric was so soft it almost definitely was weaved from clouds by baby cherubs. If you wondered why you spent $45 dollars for those leggings with the cats-playing-pianos pattern, it was not markup to pay consultants. Do you expect cherubs to work for minimum wage? Do you think clouds come cheap? NO MA’AM on both accounts.

You know what they say about desperate times.

I peeked around to see if any neighbors were strolling around. When it seemed the coast was clear, I STEPPED OUT OF MY SKIRT, leaving it in a pile of snow, and I ran to the car.

I cannot emphasize enough the degree to which I was pantsless. In my front yard. In broad daylight.

The garage door opener was, oddly, right where I said it was. I darted through the garage, retrieved my skirt, and emerged to two wide-eyed little boys. The tears they had been crying over ice and rectangles still streaked their cheeks. They silently stared at me in awe and bewilderment.

My voice was calm, quiet, and terrifying. “Get. In. Your. Seats. DO NOT MAKE ME TELL YOU AGAIN.”

Those little boys scampered into their seats in record time. They didn’t make a peep the entire car ride.

If you were wondering, I made it on time to my meeting, where I was a guest writer on the topic of "Awesome Families".

The irony was not lost on me.

Update:  I mustered the courage to buy a second Lularoe item. A knee-length dress, just to be safe. Take THAT, Brittani!

Note: As I am the owner of only two Lularoe items, I am not an expert, and it is possible that my perspective of their business model is not completely accurate.

Except the part about the cherubs. That's true.
Posted by Unknown at 10:30 PM 2 comments: